Forget glandular fever: with the recent introduction of the B vaccine, meningitis is ‘the kissing disease’ that’s currently on everyone’s lips.

Spread via sneezing, coughing – and yes – smooching, meningococcal bacteria commonly live at the back of our noses and throats and most of the time, cause no problems at all. 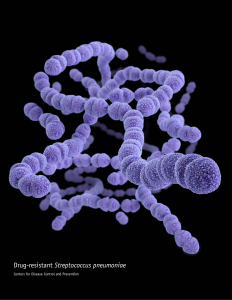 Streptococcus pneumoniae, a common cause of meningitis

However, when the bacteria find their way into the bloodstream, they can multiply rapidly, causing the layers of tissue around the brain and the spinal cord (the meninges) to become swollen and inflamed. This can lead to flu-like symptoms, loss of consciousness and, in extreme but thankfully rare cases, death or permanent disability.

Septicaemia – or ‘blood poisoning’ – is a more life-threatening form of the infection. It’s responsible for the famous purple / brown rash which many of us think of when we visualise meningitis. Its hallmark feature: the rash doesn’t fade when pressed with a glass.

There are around 2,000 new cases of bacterial meningitis a year in the UK, with further cases caused by viral and occasionally even fungal infection. Infants are the age group at highest risk, followed by adolescents. Risk factors include travel to countries where meningitis is common, and living in crowded conditions such as dormitories or university halls of residence.

One of the most aggressive culprits is a particular strain of bacteria called Meningococcal B (MenB); it accounts for about 85% of new cases of bacterial meningitis each year, and one in ten people infected with MenB will die.

That’s why the NHS has decided to roll out routine MenB vaccinations for very young children: from around September 2015, babies will be offered the vaccine at 2, 4 and 12 months of age. The NHS is hoping to replicate the success of the meningitis C vaccine, which is estimated to have prevented 13, 000 cases of the disease since its introduction in 1999. (Babies are also routinely vaccinated against Haemophilus influenzae, yet another bacteria which can cause meningitis).

There will be a catch-up programme for babies aged three or four months when the MenB scheme rolls out, but anyone older than four months won’t be routinely offered the injections.

Handily, there is an alternative. The MenB vaccines will be available from a small number of private clinics, under the tradename Bexsero®. It’s worthwhile seeking advice, as the number of injections needed will vary according to the age of the person to be vaccinated.

Symptoms of meningitis include a stiff neck, vomiting, fever, headache and an inability to tolerate bright light. Seek medical help immediately if you have these symptoms, and/or a rash that doesn’t fade under pressure. 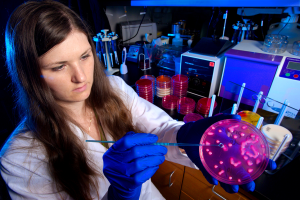 A scientist working with another culprit, Klebsiella pneumoniae

[Statistics taken from reports by the Meningitis Research Foundation]